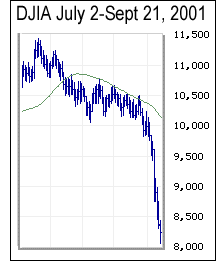 It is conceivable that stocks might have come back after September 11, just as so many people had hoped. But the meddlers in DC seemed to be doing everything in their power to make sure that it would not happen. As a result, the government has compounded the destruction wrought by the terrorists, and added to the economic miseries of the moment.

The week following the attack unleashed an amazing barrage of legislation and proposals that can do nothing but harm American productivity. This was the last thing the economy needed even before the attack. Remember that stock prices reflect an estimation of the future. If the performance this week is any indication, bad times are on the way. That's exactly what you would expect given the blizzard of statism coming out of D.C.

We can start with the $40 billion that Congress authorized for counter-terrorism, rebuilding, subsidies, and other purposes known and unknown. Nobody stopped to ask: where does this money come from? The answer is that it is sucked right out of the private economy.

One way or another they will get it from us, whether through taxes, debt payable later, or inflation. For days, there was talk of the need for a special wartime tax, and the need for all of us to cut back. Say what you will about this kind of rhetoric, it’s not good for stocks.

Some people say: it will come from the surplus. But any spare change lying around Capitol Hill is better used for more tax cuts, for which this spending package has killed all hope.

Others say: but this will provide a stimulus to the economy. In fact, not a day goes by when another commentator doesn’t claim that all forms of destruction, whether terrorist attacks or government spending, are actually good for us because they lead to more aggregate demand. Timothy Noah at Slate was the first to make such a claim, but Paul Krugman of the New York Times, then Larry Kudlow of National Review stepped up to the plate to say the same.

As Frederic Bastiat explained long ago, this view disregards the alternative uses to which the resources might have been put had terrorists not destroyed them or had government not decided that it needed scarce resources more than we do. Government spending is a drain, not a stimulus, to economic activity. This is true regardless of whether you think such spending is justified.

Even now, the government is waging war against so-called price gougers who are trying their best to reconcile existing market prices with the new reality. Rather than allow them the freedom to match demand and supply, the feds are pursuing criminal prosecutions against people who charge too high a price. Especially preposterous is the idea that real estate prices in Manhattan ought to be fixed at the pre-attack level. Because office space is suddenly highly limited, this makes no sense. It will discourage new building.

The federal government doesn’t seem to understand that the enemy is supposed to be terrorism, not capitalism!

Another disastrous step was the severe air-travel restrictions that the FAA put in place. It began with the forced grounding of all planes, a "no-fly zone" for America. It continued with a series of senseless regulations that will do nothing to make travel more secure. The hijacking did not reflect a failure at the level of luggage, pre-screening, curb-side check-in, mail cargo, VFR flights, or the proximity of cars to the airport. They had nothing to do with the attack. Yet these were exactly the areas tightened last week.

Meanwhile, the hijackers used razor blades and box openers–items that are only effective in a plane without an armed passenger on board. The FAA has done nothing to make it easier for airlines to arm themselves against malicious characters. So while the rest of us face much higher costs of travel, the terrorist is still in a position of power over the pilot and crew, even right now! The result will not be increased security but higher fares and hugely increased inconvenience. The economic consequences of this are incalculable.

The federal government has also demanded eavesdropping software on all our internet service providers. They are no longer permitted to resist. Hence, the very medium that has fueled a substantial amount of economic growth over the last decade is being regulated. And this is only the beginning. Now that government has its big, ugly foot in the door, it is going to demand a huge increase in power over the internet–all without demonstrating any connection between the attack and a free market in technology.

The Federal Reserve has opened the monetary spigots like never before, threatening the very value of the dollar and promising a total bailout of the banking system in the event of financial meltdown. The Fed is also demanding that other central banks go along. Pathetically, the Central Bank of Japan lowered the discount rate from 0.15 to 0.10. No word on why it didn’t go all the way and eliminate interest all together. Will we ever learn that printing money is no way to solve an economic problem?

Many in Congress are calling for higher taxes, national ID cards that would track our every movement, industrial bailouts, and a thousand other bad ideas, including and the ability of the president to take any actions he desires against anyone he personally deems a threat. And much more is coming. All of these are incompatible with the idea of freedom, which is the very basis of prosperity. You can’t expect economic recovery to come from an attack on freedom.

Meanwhile, simple steps that will increase the prospects for recovery are not being pursued. All types of taxes ought to be dramatically cut. This will pump more resources into the private economy where they will actually do some good. Controls on oil production should be repealed. This will drive down the price of oil and break the back of the US-created OPEC cartel. Sanctions against foreign countries need to be repealed, accomplishing two great effects: providing more opportunities for trade and eliminating a source of resentment felt most heavily in the Arab world.

Airline security is the most immediate concern. The FAA should permit pilots and crews to arm themselves. It is an outrage that this has been generally discouraged and even prohibited up till now, even for stun guns and other non-lethal weapons.

The answer to all social problems is more freedom, not less. Every despot since time immemorial has used a crisis to do what he would like to do anyway. The would-be despots in Washington should not be allowed to get away with it. The path to prosperity, now and forever, is the same: leave the market alone.

Llewellyn H. Rockwell, Jr., is president of the Mises Institute and editor of LewRockwell.com. Send him email at Rockwell@mises.org. See also his A Tribute to Trade, which was published in U.S. newspapers and in several languages. See also his Daily Archive.