ARE WE REALLY SO GULLIBLE?

Dear American Citizen: We believe that a terrorist attack on America is imminent, using chemical and/or biological weapons of mass destruction. We don't know where or when this attack will occur, but we are encouraging every citizen to be prepared by having at hand plastic sheeting and duct tape sufficient to seal your home or a portion of it, water to drink, food to eat, a flashlight, radio and batteries sufficient to run both for at least three days. Signed, Department of Homeland Security. 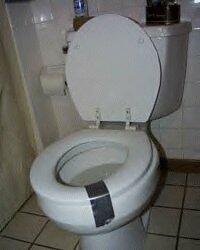 Apparently so. People are buying both, along with water, batteries and food, at an alarming rate. Rather mindful of the Y2K scare. No doubt the manufacturers of plastic sheeting and duct tape are enjoying the upturn in their business profits.

And are we really so gullible as to believe our government is doing everything in its power to protect we citizens? Or do we just want to believe that?

It would seem that the latter is the case, judging from the fact that very little has been said by either the government or the media about the multitude of illegal aliens (or as it has been so aptly put, illegal invaders) being allowed to walk across the border between Mexico and the United States without fear of being apprehended.

If President Bush is so concerned about the security and safety of America and Americans, why hasn't he moved to secure our borders? Why are these illegals being allowed into the United States with such wanton disregard for the safety and well-being of U.S. citizens? Several US citizens have already been killed by these illegals, including National Park Ranger Kris Eggle. Crime in the areas where these illegals are coming in is rampant. Recently, the brother of Congressman Jim Kolbe, Arizona, found a backpack near his farm buildings that contained a diary written in Arabic and Spanish. The implications could not be more clear.

Why all the hype about homeland security when this breach of our borders is going on daily, hourly? Could it be that "homeland security" is a fraud, a deception to justify, among other things, the consolidation of all federal law enforcement agencies into one agency, having more to do with controlling American citizens then dealing with any threat to America and Americans from outside?

Could it be that people are so frightened of the truth that they will grasp on to any ray of hope, any straw, any tidbit thrown out by the government?

Under systems governance, homo sapien is not more than "human capital" or a "human resource," to be used and discarded at the discretion of the system. Does that really conjure up visions of a system that cares about the human condition beyond the benefit reaped therefrom?

Instead of running out to buy duct tape and plastic sheeting, people would be better off arming themselves. While President Bush and the media are diligent in their efforts to convince the American public that our greatest enemy is beyond the borders of our nation, the perception doesn't align with the reality, thus making it apparent that our greatest enemy is within the borders of our nation.

Mother and wife, Stuter has spent the past ten years researching systems theory with a particular emphasis on education.  She home schooled two daughters, now grown and on their own.  She has worked with legislators, both state and federal, on issues pertaining to systems governance and education reform.  She networks nation-wide with other researchers and citizens concerned with the transformation of our nation.  She has traveled the United States and lived overseas. Web site: http://www.icehouse.net/lmstuter   E-Mail: lmstuter@mail.icehouse.net